Taming the Beast -  the emptiness within

Taming the Beast - The Emptiness Within

Arnie is contributing his time to the film in his capacity as a creative producer and mentor, as he believes Eddie’s story is an inspiration for those millions of people who are battling to overcome their challenges with self-confidence and depression. Eddie’s story is an emotional and honest journey. Shown through interviews intercut with the  reconstruction of significant dramatic events from his childhood, we see Eddie growing up during a time of economic hardship with three brothers in the industrial city of Stoke-on-Trent in a fiercely competitive family. Already trying to deal with depression, at the age of 12, he sat down with his mother to watch a film to determine his future:
‘Terminator 2’.

The strength of Arnie’s character in the film deeply impacted him and kept him going through the periods of loneliness, deep depression, and suicidal thoughts that dogged his
young life. He was always very close to his Nan and feeling powerless to keep her alive while he watched her die in hospital, he reached an emotional turning point: Inspired by
Arnie’s story, he vows to become the strongest man in the world. The rest, as we say, is history. Now, having overcome so many major issues and reached his goal as the
strongest man, he finds himself at a crossroads in his life where he can no longer perform the feats of strength competitively.
The opening success stories are immediately followed by a drastic look back to the beginning of each protagonist and their struggles early one. We learn how Sylvester Stallone doubted his life choices and how he fought for pure survival, living in his car and even selling his dog (later he bought him back) to make his written film script "Rocky" into an international success. Arnold dives deep into his early humble beginning as a brick layer to make ends meet. And Dwayne Johnson opens up about his struggle with depression after his wrestling career.  Eddie "The Beast" Hall worked his whole life on becoming the world's strongest man and once broke the record of dead lifting 500 kg (half a metric ton) or 1102 lbs he fell into a deep dark whole and the emptiness within him took over. Thinking about committing suicide Eddie remembered who got him through the tough times as a young kid and during his early teenage year. That man was his idol Arnold "The Terminator" Schwarzenegger.

Soon after that Eddie takes of on a quest to find Arnold's roots in Austria and he was dreaming in stepping into Arnold's path to become an action hero movie star. During Arnold's Classics in Ohio he finally meets his idol Arnold Schwarzenegger and to his surprise, Arnold was as much as a fan of Eddie as Eddie was a fan of Arnold. It looks like Arnold has finally met a younger match and an immediate friendship was born.

Arnold and Eddie become friends and find many common ingredients to form a new friendship. And before you know it Arnold invites Eddie to be his business partner for the new upcoming Arnold's Classics UK, which will be held in October 2021 in Birmingham. Arnold takes Eddie under his wings and introduces him to Sylvester Stallone, one of Arnold's dearest friends. Throughout the film Arnold keeps introducing Eddie to many icons from the film-and sport industry. They all have one common message: Never give up, Never doubt yourself, Always belief in yourself and keep going.

The film ends on a very motivational note leaving the viewer after an emotional rollercoaster with hope and strength to keep believing, to keep dreaming and to march on in their endeavor to achieve the impossible. We all have the strength in us to tame the inner beast of darkness, doubt and depression. 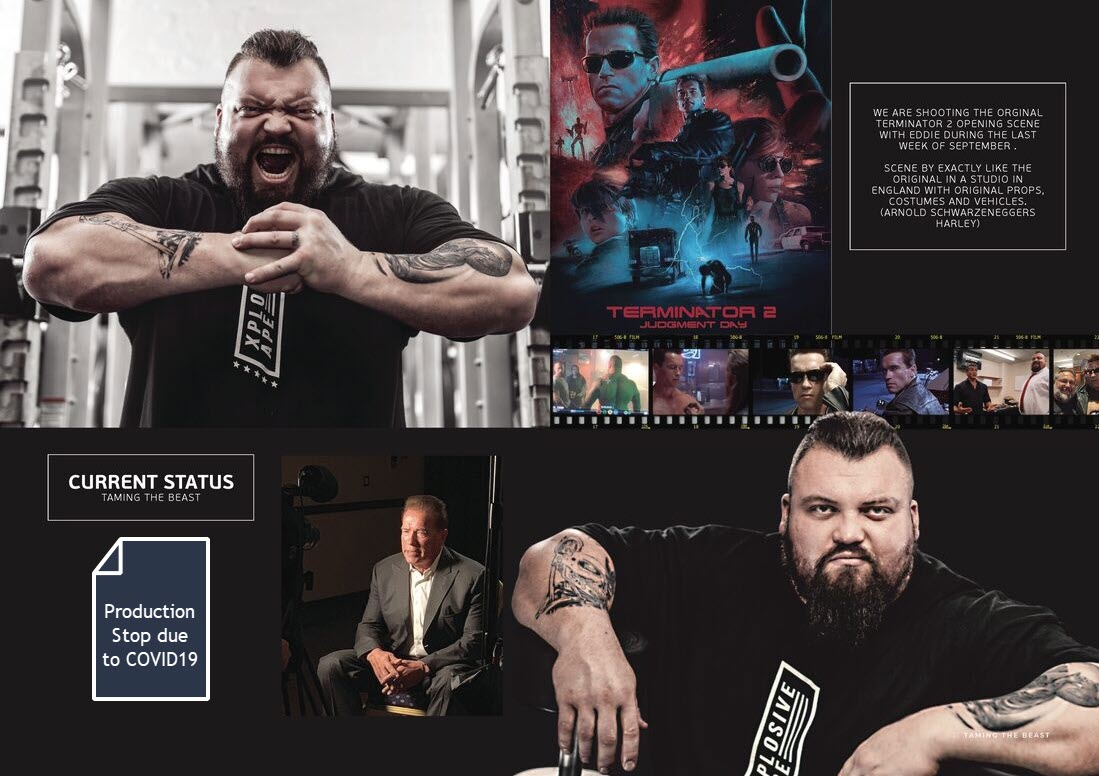 The documentary is shot in a cinematic feel by Award winning Ali Faharani and Matt Bell at many original places or in studios. Just like the completely reenacted scene of Terminator 2’s opening scene. Eddie, at the age of 16 and played by an actor, imagines on how he would look on the big screen as Arnold Schwarzenegger. Shot by Shot the scene has been reenacted by Eddie Hall.

That is just one example. There are many other action scenes like pulling a stunt person from an overturned burning accident car or drowning in a pool of water. The documentary is nicely balanced between interviews, narratives, reenacted scenes and mentoring moment through Arnold Schwarzenegger and other protagonists.